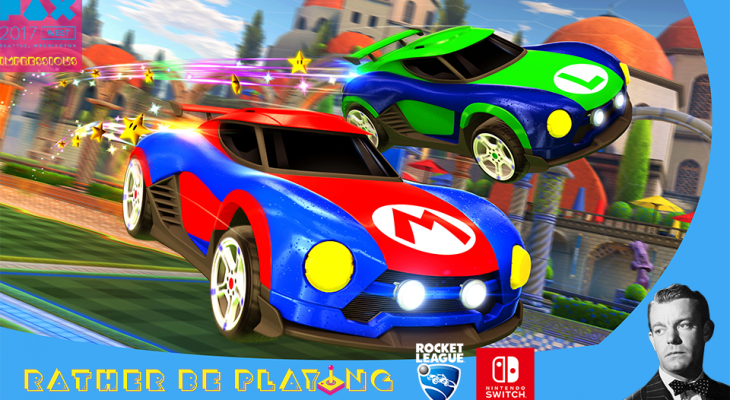 As we strolled through the raucous fourth floor Expo Hall of the Washington State Convention Center, one booth stood apart from the rest. The fourth floor is where you went to find many of the big names in the business: Capcom, Square Enix, Playstation, Xbox, and, of course, Nintendo. The Nintendo booth was marked by a long line of anxious gamers that snaked up to the row of Super Mario Odyssey demo stations from who knows where. But that’s not what we were here for.

Among the Odyssey demos on the main floorspace were a dozen or so other stations that allowed visitors to sample Nintendo’s latest fleet of games-in-progress. Booths of Switches and 3DSes dotted the carpeted space, each with their own much shorter lines of gamers. One of these stations featured Rocket League on the Nintendo Switch, a game I’ve been eagerly anticipating since before it was announced. If you’ve listened to the podcast or watched our Twitch streams, you’ll know that Rocket League is a mainstay of Rather Be Playing. We play it regularly and often use it as a backdrop for our very important discussion sessions. Getting it on the go only means we’ll be even more productive, right? Tax write-off!

As Josh ran off to explore the nearby Square Enix booth, Stevo and I waited for the three people in front of us to finish their match (a fourth system was there, but wasn’t working). The Switch assemblies at this booth were set up in handheld mode, and when our turn came, we each took a system and another man took the third. Given that there were only three of us, we played 2-on-1 with Stevo and I on one side. Then Mannfield materialized on the screen, teams were chosen, and the game was on.

Let’s start with the graphics. For the most part Rocket League on Switch looks and plays like what we’ve come to expect from Rocket League on other platforms, but for an important difference: it was noticeably scaled down. While I couldn’t tell exactly what resolution the demo ran at, it seemed to me to be a step or two below the native 720p that the Switch is capable of producing in handheld mode. Looking closely at my car, the sweeping curves that I’d grown used to seeing rendered smoothly on my 1440p monitor at home were showing markedly more jagged and pixelated on the small screen in my hands. I wasn’t too surprised, considering the Switch isn’t quite as powerful as the other platforms, but until then I’d been holding out hope for at least native resolution. Ultimately, I can’t say it took much away from the experience, though: I didn’t notice the resolution until I looked for it during a slow motion replay.

While the pixels might not be as tight as I’d hoped, Psyonix made up for it in an equally (if not more) important area: performance. The demo ran at a smooth and consistent 60 frames-per-second throughout the entire match, which I’m using as an excuse for not immediately noticing the lower resolution. In a game like Rocket League, where complicated plays are built on precision movements, and the span between sweet victory and bitter defeat is only fractions of a second long, a stable 60fps is crucial. So we were relieved and excited to find that this demo was as snappy and responsive as the full game is on other platforms. It looked really good live and in person.

The smoothness we felt during play wasn’t entirely due to the consistent frame rate. Remember, we were playing in handheld mode, which means that we were connected to one another wirelessly in a local area network. LAN play is a feature new to the game, and it will be rolled out to the other versions in the coming months. But since a LAN connection was required for us to play together in handheld mode, we got a small taste of it on the show floor. Much like the hardware performance, the multiplayer connection didn’t skip a beat. We didn’t notice any lag or delay in play of any kind during the match. Combined with the smooth frame rate, we were presented with a very stable and consistent local multiplayer experience from start to end.

But how did it feel to play? One concern we had about the Switch in particular was with the controller. The Switch lacks the analog trigger buttons that the PS4 and Xbox One use to map acceleration to how far the buttons are depressed. The further the R2/RT button is pushed in, the faster the car goes. On the Switch, the corresponding ZR button is a single, solid click. How well could it play without the ability to fine-tune your car’s gas pedal? Just fine, as it turns out. Anyone who’s played the PS4 version via remote play on a Playstation Vita will find the feel of it familiar. The car simply goes from zero acceleration to 100% when the button is pressed. It did take a few moments to adjust, and even after that there was the odd occasion where the pedal-like sensitivity was missed. But by the time the match ended, I’d nearly forgotten there was a difference.

One part of the controls that didn’t feel quite right, however, were the analog sticks. The sticks on the joycon have a shorter diameter and height than those on the PS4 and Xbox controllers, meaning that the tilt range of the stick is also shorter. The demo didn’t seem to fully compensate for this difference, making us feel like we couldn’t tilt the sticks far enough in any direction. As a result, turns weren’t quite as sharp and control wasn’t quite as tight as what we were used to. This problem came as a bit of a surprise because, even after playing many other Switch ports, it was the first time I’d encountered it. The people manning the booth told us before we started that certain parts of the game were still being fine-tuned, and I have to imagine (and hope) that this was largely what they were hinting at. It’s worth noting that the sticks on the Switch Pro Controller have a more similar tilt range to those on the PS4 and Xbox, so the issue wouldn’t be present when playing with one. But the distance it takes to go full-tilt, so to speak, on a traditional stick still needs to be properly translated to the joycon format.

By the time the match ended Stevo was on the other team–a change he made once we were up three goals to one. The final score was 5-2, but all three of us walked away grinning. It was Rocket League, through and through, in the palms of our hands. While some parts are still in need of fine-tuning, the spirit of the game was unmistakable. And at an unwavering 60 frames per second with a lagless local wireless connection, Psyonix shows us that their priorities are in the right place. If they can perfect the controls by the time the game releases later this year, it’ll be something very much worth looking forward to.

For a further look into our PAX 2017 exploits, check out Episode 9 of the podcast.