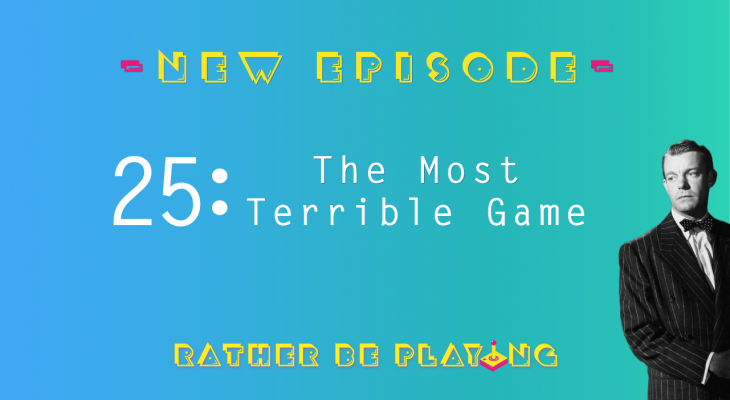 I mean not terrible as in bad, but terrible as in ‘hoooooly hell go easy on me!’ Of course we’re talking about Cuphead here. The game you hate to love and love to hate, but that makes you love it even more. And despite how hard and unforgiving it is, we finished it! I mean Josh finished it! Stevo is inches away and Elliot is somewhere out near the beginning. But it still counts. So that means this week we retire Cuphead and replace it’s spot in the roulette with a new contender. What game will it be? What game will we roll to play for the next four weeks? It’s all in this week’s episode!

The rest of the line up is drawn from a well of distilled nostalgia. Stevo is just about through Castlevania: Symphony of the Night. Don’t you just love it when he plays the old classics and loves them as much as you did when you first played them? And along similar lines, Elliot has been replaying Xenogears for the first time since his first time. How has it aged? Is the text still slow now that we’re older and can’t read as well? Yeah, it is, but he’s loving it anyway. Josh is also tap dancing his way down memory lane with Xenogears, so listen as they share a moment of fanboy gushing. Hope you brought an umbrella.

While we’re soaked in nostalgia, we list our own #GameStruck4, the meme from last week that is now long dead. The meme asks you to name the four games that define your love of gaming the best. It’s a fun bit and it takes us way back to our fond beginnings.

Then we round out the cast with a boat load of one-sentence news. A lot has happened in the last two weeks! So find out what we think and in the meantime, come join in on the discussion! Leave a comment, tweet us at @rbpcast, or shoot us an email at [email protected] and we’ll talk about it on the next episode. You can also check out our Twitch stream at twitch.tv/ratherbeplaying. See you all in two weeks!