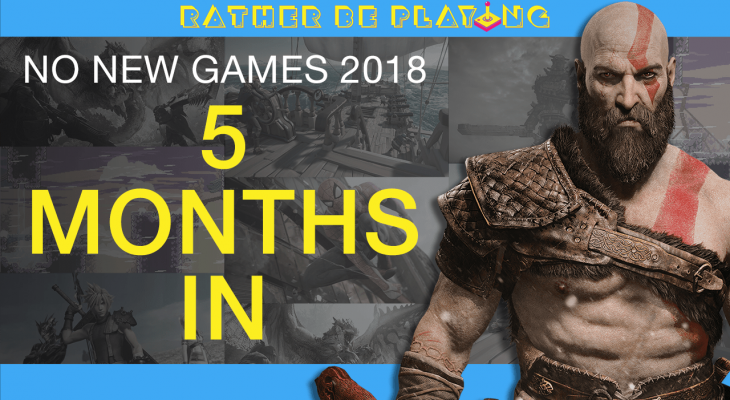 Not to beat a dead horse, but 2017 was a pretty decent year for gaming. And since we got just about every release that so much as blipped on our radars, we went into 2018 crushed beneath a wonderful deluge. A nice problem to have, but it was like drowning in pudding. So as some of you know, the three of us took a vow of celibacy for the duration of 2018. We would dedicate the year to playing our 2017 stash while abstaining from new purchases (PS Plus and other freebies are fair game). This would allow us to focus on the veritable treasure trove (including the 2017 masterpiece, Shovel Knight: Treasure Trove) sitting in our swollen gaming coffers. All we had to do was look the other way on new releases until the ball dropped on 2019. How has it worked out now that we’re five months in?

The Games So Far

We didn’t even make it a month before the fresh familiar scent of hype turned our heads. Celeste came out at the end of January to universal praise. Its simple design and approachable platforming style made it incredibly tempting as a potential addition to our fledgling Nintendo Switch libraries. Stevo was able to loophole this one into his rotation by way of a Steam giftcard he got as a gift (none of his own money spent). And from his impressions, it sounded like it lived up to the hype. If there’s one thing this exercise has taught us its to not underestimate the power of hype. More on hype in a future post.

Almost immediately after Celeste we got whiplash when Monster Hunter World stormed onto the stage. Heralded for scratching the itch that Destiny 2 failed repeatedly to hit, we really felt the hunger pangs. We love playing games together and are always on the lookout for well-crafted online coop experiences to talk about on the podcast. Monster Hunter World checked off all our boxes except one: it came out 26 days too late for us to grab it.


Since January, there have been a few more releases that managed to turn one or two of our heads, but not all three. Dissidia, the Final Fantasy fighting game, looked great to me and I really enjoyed the demo. Then a week later Shadow of the Colossus, which Stevo had never played, had his full attention. Sea of Thieves released to mixed reception, but had some incredible stories of player experiences on the high seas. Social media made this one really hard to ignore. I thought it would be a great online coop game for us, but Josh and Stevo were skeptical of its longevity. It’s starting to look like they were probably right about that.

That brings us to the big one. The most anticipated, most highly praised, and best reviewed 2018 game yet: God of War. To quote Stevo at least 6 times since it came out, “fuck no new games 2018, I’m getting it.” He’s managed to hold off, but his willpower is only so strong. God of War is the biggest test of our resolution and a small taste of the powerful temptations that are sure to come. It’s the first time we’ve all really been challenged by the reality that we’re not buying new games this year and it’s super scary. Can we really keep this up for seven more months? Until now it felt like it was possible.

The Games to Come

But here’s my additional dilemma: I’ve got $70 of PSN birthday gift credit sitting in my account. So I can get God of War without breaking this holy oath and ride it into the gaming sunset. But that $70 is all I have for the rest of the year. No more birthdays or holidays. Sure, there’s Christmas, but that’s only a week from the end of the year. Right now we’re in May. Do I want to blow the whole load only when I’m just five months in, not even halfway through the year? With Spider-Man still on the way? With Smash Bros. still on the way? With the holiday releases and sales on the way?

It’s an uncomfortable conundrum. But they say being able to delay gratification is a sign of intelligence, so I guess the longer I go the smarter I am? That’s not much condolence. What I’m afraid will happen is what happens in every RPG I play. I’ll get the one mega-elixir in the game and keep it in my pocket, saving it for a moment when I’ll really need it. And by the end of the game, as I land the killing blow on the final boss, it’s still there in my inventory, waiting for that moment. There is a very good chance I’ll still have this $70 when 2019 rolls around. But imagine how smart I’ll be.